skip to main | skip to sidebar

Getting Off Doesn't Get 'er Done

Let's get this out of the way.  The title.  It's a double entendre.  You probably got that.  But unlike the brassy 1950s paperback mysteries that Hardcase Crime harkens back to, this story is so bald-faced, so completely unapologetic, and partly because of it so unredeeming, that it's less brass and far too much crass. 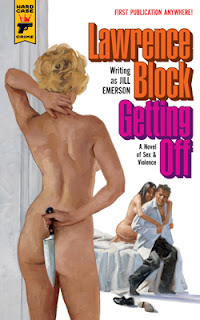 His lead, Katherine (Kit) Tolliver, is a victim of incest who blames not just Daddy, but Mummy, too.  With a slickness that belies her tender years, Kit sets up an alibi for herself after doing the bloody deed, leaving Daddy's corpse to take the wrap for a murder/suicide.  The rest of it is kind of pointless.  There's really no story.  Kit has developed a taste for sex and murder and Block binds the two together like a zip-tied hostage.

We are treated to scene after scene of her going from town to town and murder to murder, with every single one of her sexual conquests (and post-coital murders) delineated in what becomes excrutiating detail.  The only "connecting" thread is that Kit gets it into her head that she has to kill every man she ever slept with and let live.  It's a Daddy issue thing, but the list is fairly short because of all the guys she's bitten the heads off of.

Frankly, it's strange how untitillating it all gets.  The reader quickly becomes numb to the whole arrangement.  You don't have the tension and suspense that a thriller would give you if you believed for even a moment that any one of her conquests would live out the night.  Even when one does, it's simply shrugged off.  There's no thought at all that Kit's getting sloppy or sentimental or anything else.  It's just pack the bags and hit the next town and she'll catch him on the flip side.

Block writes the story as if it will appear in installments.  Every chapter or two he repeats the same information.  The number of men who are still alive after having slept with the slippery Kit Tolliver.  How her father seduced and raped her.  What it is that Kit does or feels while living her black widow life.  We hear it all, again and again.

While it's a well written story, and keeps you moving forward (kind of like a train wreck), there really isn't much of a plot.  Certainly no antagonist (since we're counting Kit as a protagonist here) to challenge the action.  A plot of some sort floats into view about 50 or so pages into the story (that of wanting to kill off all of her living bed buddies) but it is so very thin.  There's nothing that stands in her way; no blackmailer who knows her secret; no would-be victim who catches wise; no equally deranged competitor who threatens her "I'm not really a lesbian" paramour.  Kit has absolutely no trouble accomplishing her psychotic ends.  She's too smooth, too capable, and nothing catches her by surprise.

At the heart of the book is a big, heaping pile of impossible.  Not that something as terrible as Kit's childhood couldn't have happened.  Sadly, it seems to happen too often.  But in today's world of DNA, CC-TV, national databases, and other high-end forensics, Pretty Kitty would have been caught by the time the book opens.  She's casually careless as we start out on her cross-/double cross-country journey, but by the time Kit gets rolling on her impossible mission, she's downright asking to be caught. 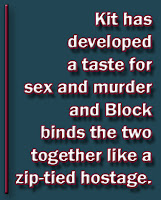 Then two-thirds into it ─ after we've watched Kit set up her prey and then knock 'em down in an impressive array of murder methods ─ the book turns into a serial killer convention.  First there's the middle-aged suburbanite who offers rides to girls stumbling home in the dead of night.  Kit offs him with very little effort and escapes on the back of a Harley driven by a bearded faceless giant who asks nothing of her but gas money and a plate of grits for breakfast.  A little later Kit ─ who's been wondering if her black widow affliction would apply to women the same way it applies to men ─ runs up against a man and wife team of sexual predators who put me in mind of a similar murdering couple from the late Robert Parker's excellent Jesse Stone novel, Stone Cold.  Maybe it's just the italic font whenever the couple is on stage, but I could swear I hear eerie music in my head; something with a bit of scratchy violins and a few swipes at a bass or a couple of blows on an oboe.

I know that I am / will be in the minority.  Apparently BookReporter, Booklist, The New York Times, The Wall Street Journal, Celebrity Cafe, and others are absolutely in love with this latest entry from Lawrence Block.  I am not.

Block is a good writer.  He may have had a good idea with this subject, but somewhere along the way it became a writing exercise when it really should have stayed a novel.  He knows how to write novels; I've enjoyed many of them.  I'm sure the next one will ... have an actual story.
Posted by ShadowPDF at 1:19 PM

One of the reasons I started this blog is because no book company anywhere – except Hard Case Crime – has the guts to do entertaining, outrageous, and sexy wraps for their paperbacks. Instead the new trend is toward shots of wide vistas of deserts or forests (Westerns), or close shots of a few odd items that appear in the story (mysteries), or abstract geometries, static hero shots, and spaceships (SF). All of it is boring and unimaginative.

I felt an overwhelming need, therefore, to celebrate the thrilling images of past paper-backs, and to keep them alive.

Here, we will applaud the vivid, the active, the thrilling, and the enticing. We will be seduced by the alluring. We will hear the buzz of a six-gun’s death pill. We will enjoy the sights of sleek dames and sleeker needle-nosed spaceships. We will thrill to the crunch of a heroic swift right cross on an evilly sculpted chin. And we will joyfully inhale the heady, musty smells of old friends found anew.

Here be true paperbacks from their glory years. They live still in our hearts and memories, gleaming as bright as the day we first discovered them in their revolving wire racks at the drug store or five and dime. Here, we celebrate them and read them again (often for the first time), and

share with you a joyful passion for when great paperback covers were common, plentiful, and as cheap as the blonde in the crumpled bedsheets.

ShadowPDF
I write westerns under the name Clay Burnham, and have written a variety of stories and comics over the past 20 years (with marginal success). My first four novels were available at AmazonUK, but have now sold out. I hope to have a fifth novel published soon. I worked for First Comics before they went bankrupt, writing for Sable and Nexus.