skip to main | skip to sidebar

No Double Cross for the Reader With This One

Boy! This guy means business, his face set in deadly grim determination. His six-gun is flaming from inside a cloud of gunsmoke. He’s fanning shot after shot. One dirty dog is dead at his feet, spurs up, dust soaking up his blood. Wow! 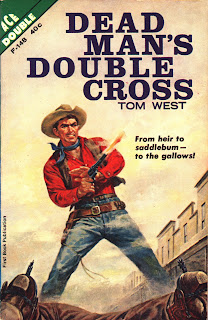 By the time Tom West wrote this sharply-paced oater in 1962 he was an old hand at western melodramas and the Ace Double novel format in particular. From the early ‘50s to the early ‘60s he wrote some 15 titles for Ace, and followed up with twice as many more by the early ‘70s. All of these were of the rip-roarin’ shoot-em-up variety, many with great titles and some with great covers. A list below gives you an idea of West’s output.
I looked for information on West on the Web but found almost nothing. His actual name was Fred East, which makes the West pseudonym humorous. One library entry states he was born in 1895 in London, which would jibe with a short, three-paragraph biography printed at the front of the F-149 Ace Double Dead Man’s Double Cross. That entry says that he served in World War I and was honorably discharged in his early twenties. His first literary attempt was a war novel that he had written while convalescing. The manuscript never was published, having met a fiery end. Apparently his mother burned the filthy rucksack he brought home from the army. Everything in it was destroyed, including the manuscript he had stuffed inside.

West (East) left England for America to further regain his health. The biography does not mention if he was wounded during the war. He took a number of jobs, including ranching, before turning back to writing. Copywriting, reporting, editing, and free-lance article writing helped nurture his skills. Then he began writing Western novels.

He had a good home with Ace, in their double novel and occasionally in their single novel format. It doesn’t appear that he was often published by other companies.  One title, Ghost Gold was published by Pocket Books (#733) after a hard cover publication. Flaming Feud may have begun life as a hard cover, too, then went to paperback at Magnum Books.  At the time Dead Man's Double Cross was published (1962), West claims to have written 36 novels.  He ghost wrote some series like the Peter Field Powder Valley stories, and had some short stories published in magazines like Triple and Action-Packed Western at the tail end of the pulp era.  Why the move from hard cover to Ace Doubles is not known, but money is often at the heart of such matters. 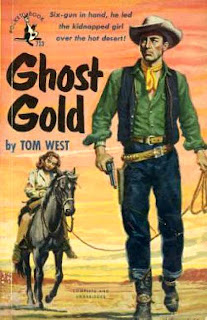 I was a bit confused by the voice West used to tell his story. It differs from other books of his I’ve read. Rather than the cool, grammatically correct third person limited perspective used to good effect by many authors West opts for something a little more colloquial. His dialogue especially is peppered with words like “wal” (well), “hyar” (used in “now see here”), “jest” (just), “lamp” or “lamped” (see or seen), “chew it” (explain), and many others. Even descriptive text is flavored with a down-home feel, giving the reader the sense that the book was written years ago. In fact, the story sounds like something that might have been written in the ‘30s by B.M. Bower, maybe, or by Clarence Mulford. The cowboy humor in particular is in the same vein as Mulford’s Hopalong Cassidy epics.

This appears to be a choice the writer made that differed considerably from the past few projects of his I’ve read. Don’t get me wrong. It’s a good choice. I liked the story. The sly humor especially keeps this twisty tale entertaining and adds dimension to the characters.

Much of Dead Man’s Double Cross is filled with action, and these many moments race along at a brisk pace. West can sure tell an entertaining story. The only slower moment in this 50,000-worder is the three-page fist-fight scene between the lead, Joe Garth, and one of his deadly enemies. It’s not that the scene is really slow; it’s that I’m biased. To my taste, few people can describe a fist fight as well or as interestingly as Louis L’Amour.

All in all, though, this is a pretty good pull-yourself-up-by-your-own-bootstraps story. Very much fun.

One of the reasons I started this blog is because no book company anywhere – except Hard Case Crime – has the guts to do entertaining, outrageous, and sexy wraps for their paperbacks. Instead the new trend is toward shots of wide vistas of deserts or forests (Westerns), or close shots of a few odd items that appear in the story (mysteries), or abstract geometries, static hero shots, and spaceships (SF). All of it is boring and unimaginative.

I felt an overwhelming need, therefore, to celebrate the thrilling images of past paper-backs, and to keep them alive.

Here, we will applaud the vivid, the active, the thrilling, and the enticing. We will be seduced by the alluring. We will hear the buzz of a six-gun’s death pill. We will enjoy the sights of sleek dames and sleeker needle-nosed spaceships. We will thrill to the crunch of a heroic swift right cross on an evilly sculpted chin. And we will joyfully inhale the heady, musty smells of old friends found anew.

Here be true paperbacks from their glory years. They live still in our hearts and memories, gleaming as bright as the day we first discovered them in their revolving wire racks at the drug store or five and dime. Here, we celebrate them and read them again (often for the first time), and

share with you a joyful passion for when great paperback covers were common, plentiful, and as cheap as the blonde in the crumpled bedsheets.

ShadowPDF
I write westerns under the name Clay Burnham, and have written a variety of stories and comics over the past 20 years (with marginal success). My first four novels were available at AmazonUK, but have now sold out. I hope to have a fifth novel published soon. I worked for First Comics before they went bankrupt, writing for Sable and Nexus.